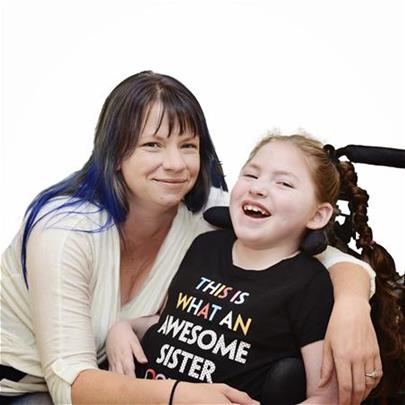 Since 2013, the California Children’s Services (CCS) Pilot, which later became the Whole Child Model, has provided comprehensive health care for more than 1,880 children in San Mateo County with complex and chronic medical issues: some debilitating and lifelong. The Whole Child Model's pioneering approach is made possible by a unique collaboration between the Health Plan of San Mateo (HPSM) and San Mateo County Health System. Their partnership enables coordination of all services and support through a single access point, It also provides dedicated case management for each member. Outcomes have been so successful that state lawmakers passed legislation based on the CCS Pilot in 2016. As a result, 20 other California counties will adopt the Whole Child Model starting in 2018.

The Whole Child Model has helped many special needs children. Here is one family’s inspiring story.

Eight-year-old Clover was born with severe Cerebral Palsy. She struggles every day with challenges that most people can barely imagine. She cannot walk and needs a wheelchair. She is legally blind and cannot speak, communicating only through sounds and gestures. She cannot eat or drink through her mouth, and is fed through a tube surgically inserted into her stomach. She cannot use a bathroom on her own and must wear diapers. Almost daily, Clover’s lungs fill with such thick phlegm that she must wear a vibrating mechanical vest to loosen it enough so she can cough it up.

Such difficult experiences would test anyone’s strength and spirit. Yet Clover is a remarkably joyful girl. She loves her mom, dad and little brother. Caring for Clover is her mom Stephanie’s more-than-full-time job. The Whole Child Model provides everything Clover needs and also empowers Stephanie to advocate for her daughter and other special needs children.

Stephanie learned about Clover’s diagnosis when she was born, but didn’t know how to get her daughter the care she needed or even who to ask for help. “I’d never dealt with anything like this before,” Stephanie said. “I was afraid of what would happen if I did something wrong, or didn’t do something I needed to. It was scary and overwhelming.”

Stephanie got medical coverage for Clover through Medi-Cal, and she was enrolled in San Mateo County’s CCS Program. This helped immensely, but Stephanie still had trouble finding her way through the County’s complex health care system, which is composed of separate agencies offering different services.

When Clover was six months old, Stephanie met Teresa Jurado, the CCS Program’s Parent Mentor. Teresa’s son also had Cerebral Palsy and had graduated from the CCS Program, so she had been in Stephanie’s shoes. Teresa provided emotional support in a way that only another mother of a special needs child can. She also helped Stephanie navigate the County’s complex health system, making it much easier to get Clover the care she needed.

When the CCS Pilot launched in 2013, Teresa had been mentoring Stephanie for two years and seen her grow into a strong advocate for her daughter. As the CCS Pilot’s Parent Mentor, Teresa invited Stephanie to join a brand-new ten-member Family Advisory Subcommittee comprised of CCS members’ parents and guardians. The group was tasked with suggesting improvements to the Pilot based on their experiences with CCS. Serving on the Subcommittee empowered Stephanie to become a stronger advocate for both Clover and other special needs children. For example, Stephanie championed successful plans to get members the high-quality incontinence supplies they need and streamline the medication approval process to ensure members can get all the medicines their doctors prescribe without delay.

"The partnership between HPSM and the County's CCS Program has made it easier for our families to access community-based services. Bilingual HPSM-CCS staff have been particularly helpful to families we see with limited English proficiency."

Chief, Division of General Pediatrics at Stanford University and Associate Professor of Pediatrics at the Lucile Salter Packard Children’s Hospital

"The Whole Child Model addresses not just the member’s CCS condition, but all the needs of the child and family. Its success is based on the whole family’s active involvement."

"With Whole Child Model staff co-located at HPSM, families call one person when they need services, referrals or advice. This makes it easier for them to get the best quality care for their children."