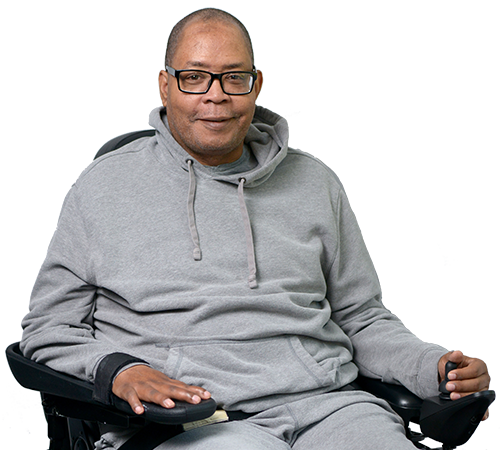 Here is the story of one person whose life improved because of HPSM’s CCSP.

From homeless & sick to housed & healthy

After Kojo got his law degree from Howard University, he worked as a paralegal in Washington DC while studying for the Bar Exam to become an attorney. Then, tragically, everything he had worked so hard to build suddenly collapsed when he had a psychological breakdown. He was diagnosed with schizoaffective disorder, which causes psychosis, hallucinations, delusions and paranoia.

Having lost his job and with no family to support him, Kojo moved to the Bay Area for a fresh start. But mental illness destroyed that dream too, and he became homeless in San Francisco for the next decade. Kojo’s symptoms made engaging with other people stressful, so he avoided homeless shelters and instead lived mostly in city parks. With no health insurance to pay for psychiatric medications and disability checks as his only income, Kojo spent what little money he had on food instead of medicine.

In 2014, Kojo was hospitalized for a stroke. It paralyzed the entire right side of his body and caused Expressive Aphasia, a neurological syndrome that damages the brain’s language center — leaving him able to understand what people say but limiting his ability to communicate.

When Kojo was medically stable, he was transferred to a nursing home in Daly City. By then, he was getting medical coverage through HPSM, and in 2015 he was enrolled in CSSP. Kojo’s CCSP social worker started by making sure he could stay in the nursing home. Then she assembled a professional care team of medical specialists, including a psychiatrist who prescribed medications that keep Kojo psychologically stable. She also accompanied him to doctors’ appointments and got him an electric wheelchair so he wouldn’t have to push himself around with one arm anymore. All of this was a game-changer for Kojo. “After the stroke, I couldn’t afford to stay in the nursing home, so I thought I would be homeless again,” he says. “I felt like I was on the outside of a locked door. When I met my CCSP social worker, it was like she opened the door and let me in. She advocated for me and listened to me. I could tell that she cared about me. That made me feel safe and protected.”

Even though Kojo can’t perform many everyday tasks on his own because of his stroke, by May 2015, he was functional enough to transition from the nursing home to a lower level of care. So his social worker recommended he move to a 55-resident RCFE in Daly City. They have a licensed nurse onsite, so Kojo can get immediate help anytime. People still help him with everyday tasks, but he has more privacy, autonomy and recreational opportunities. For example, he also attends Coastside Adult Day Care four days a week. Kojo’s social worker says “I’ve been really proud of what he’s done in the last year. When I first met him, he was a grumpy guy. Now he socializes and smiles. He takes physical therapy in the hope that someday he’ll be able to use a walker. Even after all he’s been through, he has goals for improving his life. Kojo knows he has a lot to live for.”

Since 2014, HPSM’s Community Care Settings Program (CSSP) has helped hundreds of people with chronic conditions transition from long-term care (LTC) facilities back into the community. The program — jointly run by HPSM, the Institute on Aging (IOA) and the public housing agency Brilliant Corners — connects people with a range of services: from medical and behavioral health to community resources and housing. As part of CCSP, members are assessed for appropriate level of care. The options include independent housing, shared housing, a return to home or a Residential Care Facility for the Elderly (RCFE). For those who require a little more assistance, an RCFE is an ideal destination, as they can assist members with daily living tasks. An RCFE is a less restrictive, more community-based environment than an LTC, but it still has onsite support services. Moving appropriate candidates to RCFEs improves their quality of life while making LTC spots available to people who need them. Research also shows that CCSP saves the County and State medical delivery system about 36% in total costs.